I received two large tomatoes in my produce box this week. What better use could there be than stuffed tomatoes? 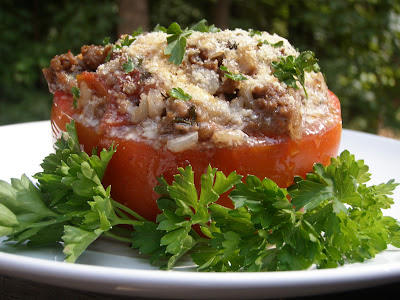 If you make a little extra each time you cook a freezer-friendly recipe, you'll quickly build up meals to defrost & cook for those nights when take-out looks awfully tempting. Don't ruin your budget; just plan ahead a bit. 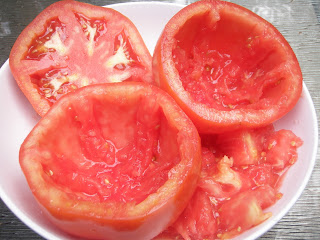 Slice the top 1/3 off each tomato. Chop this slice after removing the core.

Scoop out the inside of the big tomato piece.

When done, you'll have something that looks like this ---> 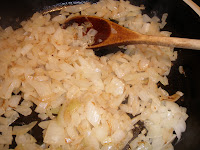 Saute the chopped onion until tender and golden.

Add the lamb and cook until browned. You also can use leftover leg of lamb; if doing so, just cook it with the onion long enough to warm it up. 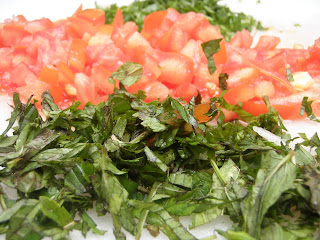 While the onion and lamb are cooking is a great time to gather the rest of your ingredients.

Once the lamb is browned, add the tomatoes, wine, mint, parsley, cinnamon, and salt.

Reduce heat and simmer until the mixture thickens. This only takes a few minutes. 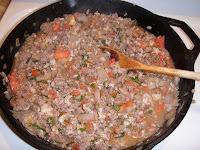 Stir in the cooked rice. The resulting mixture isn't the prettiest thing I've ever seen, but it tastes great!

Spoon the mixture into your tomatoes. Sprinkle each tomato with about a teaspoon of breadcrumbs and a tablespoon of Parmesan cheese.


Bake at 350 degrees for about 25 minutes, until heated through. Before serving, sprinkle with a bit more chopped parsley.

You can make these ahead, too. Once the tomatoes are stuffed, cover and refrigerate. When you're ready to bake them, you'll just need to add about 10 minutes to the cooking time.

If you're only stuffing a couple of tomatoes now, you can freeze the leftover stuffing for 2-3 months or refrigerate for 3-4 days. If you're not sure how long leftovers are safe, check out stilltasty.com!

I can't wait until I receive more large tomatoes from The Produce Box; I have stuffing in my freezer, just waiting for them. 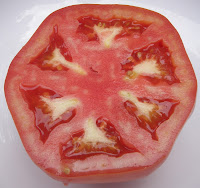