What a week! Between the store not having any okra (I wasn't up to another trip to the Farmers' Market with the baby), baby Rosie having a hard time, and my computer having a virus, it was a rough week... life did not go as planned, and that's okay. No ingredients went bad, as I made sure to still use the ones that would be in danger.

Meal planning is meant to help you, not create a burden. I believe in having a dinner plan, but also in the ability to be flexible. If you need to do a different dinner than what you planned, go for it! Just be sure to use up ingredients that would otherwise go bad. Don't give in to take-out when you've had a bad day! Just make something super-easy (like quesadillas) and move on.

Example: Last night, I had chicken defrosted in preparation for Tarragon chicken. I typically have shredded cheese and flatbread around b/c flatbread seems to keep forever and makes nice sandwiches. So we had Super-Easy Quesadillas instead. Ta-daaa! Dinner.

I chose the "Surprise" box from The Produce Box this week. I received: 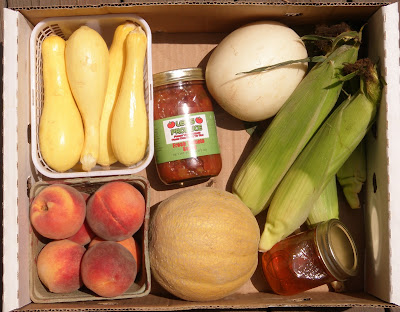 Lunches - I'm going to experiment in making chicken salad with grated summer squash in it. I'll keep you posted on that. Dinah's not a big peach fan, so I'll mostly be enjoying those w/ my lunches.

WED 8/4 - Previously, I froze leftover Cuban Ground Beef Creole and Cuban Black Beans, knowing they would make for great burritos. Tonight, I'll be enacting that plan. I have a few grape tomatoes and a little bit of mint hanging out in the fridge, so I'll also make Roasted Tomatoes with Mint. Give it a try!

THU 8/5 - Off to the Farmers' Market for okra! We'll have Okra with Shrimp, served over rice. Really, I'm making it this time. I'll toss some summer squash in the recipe, too. I'm thinking it will be like a simpler version of Gumbo. Cucumber Salad on the side.

SUN 8/8 -
Breakfast: Chorizo and Eggs, from Simply Recipes.  I picked up some chorizo at the Farmers' Market, and I've been dying to try it!

Dinner: I'm cooking a birthday dinner for my father-in-law. He loves Stuffed Mushrooms, so I'll make them as an appetizer (using the same proportions as this recipe, cut down for 4 people). We'll also have Corn Chowder (my sister owes me the recipe!) and sauteed chicken and summer squash over pasta... One-Ingredient Ice Cream for dessert.

TUE 8/10 - Chicken Tetrazzini - just defrost and bake! Serve with salad and bread. I'm a big fan of making a big batch of something & freezing the rest for later. It's not much extra work, and it will save you a lot of time for future meals.

What do you do with summer squash? Please share your recipes!

One of the very nicest things about life is the way we must regularly stop whatever it is we are doing and devote our attention to eating.
- - Luciano Pavarotti and William Wright, Pavarotti, My Own Story