Review: Diet for a Small Planet

A reference I have come to appreciate is Diet for a Small Planet, by Frances Moore Lappe. Several editions have come out since the original publication date in 1971; my version is from 1981. This review was hard for me to write, since I do believe this book is relevant and has good information... but I have to admit it is rather outdated. There is probably much better information out there today. If you know of another resource like this one, but more modern, please point me to it!! 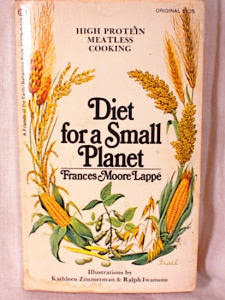 My favorite part is that Diet for a Small Planet provides good information on how to get sufficient protein from meatless meals; it contains both the theory and the recipes. Diet was also one of the first books to address the wastefulness of meat in terms of food produced (grain) versus food available to be eaten (grain-fed meat). The environmental movement was young, and vegetarians were rare; thus, a large part of her book was spent in defense of a meatless healthy diet.

If you are looking for a recipe book alone, there's certainly better ones out there. However, if you, like the author, have a concern for world hunger and for environmental damage caused by the food industry, this book can get you started in learning what you can do to make a difference.

Part I: The author's personal journey into food activism.   Lappe found food to be an "entry point" into world problems like hunger and ecological destruction. She was a graduate student and social worker with a desire to understand how individuals' choices can effect change in the world; she became a successful author and founder of the Food First Institute. The Institute continues on today, researching the ties between global economics, food supply, and human rights, working toward social change.

Part II: Two Problems Presented.   (A) People go hungry no matter how much food is grown; the food production system manages to decrease what would otherwise be great abundance, and (B) system needlessly depletes natural resources.

(A) World Hunger.   The author's position in the first edition was that America should export the grain we instead feed to livestock, thus reducing the problem of hunger worldwide. In this newer edition, she corrects herself, stating that the problem is not that simple. Exported food aid often does not reach the hungry at all, due to other governments' corruption. Also, each country has the ability to grow enough food to support itself. What America does or does not export will not solve world hunger. She clearly makes the point that world hunger is a larger issue, mainly an economic one. To further support this idea, see this quote from Greenpeace:

The world already produces enough food to feed everyone - more than enough. Food production is indeed divorced from human need.

(B) Environmental Concern.   I agree entirely with this second idea, and I think it is perhaps the more understandable one (especially compared to world economics and how to solve the problem of hunger!).  Basically, the author expresses the idea that eating meat is "like driving a Cadillac." If you want an easy way to conserve resources, eat less meat. More resources go into meat, calorie for calorie, than into any other food product - fossil fuels, water, soil erosion, you name it.

Part III: Protein Complementarity.  This section begins by addressing the two main problems with the standard American diet: too much meat, and too many processed foods. She goes on to explain how you can get just as good of protein from a meatless diet as you can from one containing meat. In more modern times, we know that any diet, vegetarian or otherwise, must strive not only to provide good protein, but essential vitamins, minerals, and a balance of other groups as well.

Protein complementarity is the idea that you must combine certain groups of foods in the same meal in order to ingest a "complete" protein, equal to that provided by meat. The 1981 edition of the book explains,


"In 1971 I stressed protein complementarity because I assumed that the only way to get enough protein (without consuming too many calories) was to create a protein as usable by the body as animal protein. In combating the myth that meat is the only way to get high-quality protein, I reinforced another myth. I gave the impression that in order to get enough protein without meat, considerable care was needed in choosing foods, Actually, it is much easier than I thought." (162)

If you are concerned about getting enough protein in your diet, this book has a fabulously helpful chart, showing combinations of foods that would be most helpful to you (page 181). It links grains + dairy; grains + legumes; legumes + seeds; as well as several other connections (though not as strong as these).

Although the necessity of eating complementary foods in the same meal is now considered an outdated idea in general, I believe it is still very useful information for individuals who need a higher protein intake (athletes, nursing mothers, etc.).

Part IV: Making Social Change Approachable.  This small section is a bit of a pep-talk, helping the reader to see that people involved in all sorts of activism are just people like the rest of us. You don't have to make it your full-time obsession... everyone can do something to help make a difference. She also provides a great list of organizations. Although I'm sure the contact information is all outdated, it can still give you a good idea of the kind of groups you can look for today.

The second half of the book is a collection of recipes, focused around protein complementarity. If you're looking for some great-tasting vegetarian meals, check out this book! The recipes I have tried have been wonderful. Honestly, though, I haven't tried many, as my husband is not terribly interested in a meal that doesn't contain meat. But don't let that stop you!

Eating healthy - whether you eat meat or not - is about having a variety of foods. Friends of mine in college, claiming to be vegetarians, would eat typical college student fare (pizza, twinkies, soda, packaged snacks)... and they were not any more healthy than those who did eat meat but would simply add, say, sausage pizza to the list. A healthy diet is more than whether you do or do not eat meat.

Start thinking about what you DO eat and what you SHOULD eat. The amount of protein, fat, carbohydrates, fruits, and vegetables... too little protein is bad, as is too much. Whether your concern is for health alone or for how you can help the environment, the way you approach food will make a difference.

To come full circle to one of my greater concerns, it's all about planning your meals. Plan what you're going to serve for dinner. Stop and think about how often you serve fresh, unprocessed foods. When you have to actually write down what you're serving your family for the week, you'll think twice about that frozen pizza. Making it fresh does not take long, I promise you! Cooking is approachable. There are endless great resources out there to help you learn how to easily put healthy meals on the table.