It's nice to have some meals frozen, ready to go. In preparation for the birth of my daughter, I froze a lot of meals, one of which was Chicken Tetrazzini. I didn't notice any difference in taste between the freshly made version and the one that had spent a couple months in the freezer!

Chicken Tetrazzini is a great recipe to use for leftover roast chicken. This time, though, I started with raw chicken, and I made a double batch. The original recipe ingredients are located here.

Start-to-finish, it took me 1 1/2 hours to get four pans of tetrazzini ready for baking. We had one pan for dinner, and I have 3 more in the freezer. I'm actually giving some to a friend who just had a baby, but I otherwise would have had 3 nights' meals ready to go, no additional prep needed. Just defrost & bake! 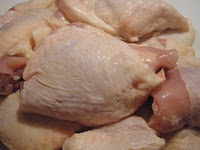 I used 5 1/2 pounds of bone-in, skin-on chicken thighs. As a bonus, since was cooking the chicken right then, I could use the water I cooked it in as the chicken broth that the recipe calls for.

I used about 6 cups. The original recipe lists 2 cups of mushrooms, so I really only needed to use 4 cups. I may have used a few extra. Just maybe. :)

Boil the chicken in enough water to cover it. My pot of water & chicken took about 20 minutes to come to a boil. Once the water boils, let it continue to cook another 10 minutes, then take the thighs out of the water. Let the water keep boiling, so it condenses down some for use as chicken stock.

While the chicken cools, prep the rest of the ingredients.
(Measurements here are for a double batch.) 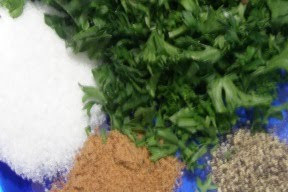 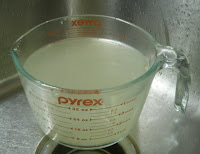 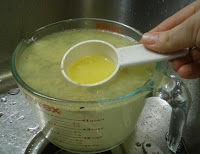 Once the broth has condensed down a bit, pour it into a bowl (or large measuring dish) and skim off the fat. I find that using a measuring cup inside the bowl works for this. Just push the measuring cup down into the liquid, and allow the fat to run over the rim of the little cup. That way, you're not disturbing the surface too much, so the fat won't get mixed back in. 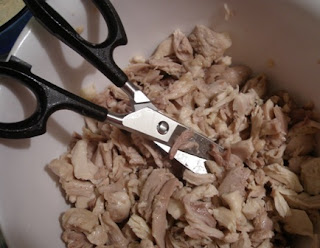 Once the chicken has cooled, remove the skin and bones, and tear/chop it into small pieces. I tear it up with my hands, then I use kitchen scissors to chop it some more once it's in the bowl.

Are you picturing me holding one little piece of chicken at a time and snipping it in half? Nah! Just stick the scissors in the bowl and start snipping.

It's time to get that pasta cooking! Separately, saute the mushrooms in the butter.

Once the mushrooms have softened, add the flour. Then, gradually add the broth. Once it boils, remove the pan from the heat. Add the cream, parsley, salt, nutmeg, pepper, and wine.

Now, combine the pasta and chicken with the mushroom mixture.

The biggest skillet I have (12" cast iron) cannot hold all this! I drained the pasta & put it back into the pot. Then I dumped in the chicken and the mushroom mixture and stirred it all together.

This made enough for two bread pans and two 8" square pans. I lined three of the pans with foil (one was for dinner that night, so no need for foil).

Next time, I think I'll divide the chicken and pasta into the pans and then add part of the mushroom mixture to each pan.

Some for Later: Once the foiled pans were full of tetrazzini, I put more foil over the top and sealed up all the edges. Into the freezer the pans went! Once they are frozen, I can pop the foil packet out of the pan, and drop it in a gallon freezer bag. That way, I get my pans back! When it's time to bake it, I'll take it out of the freezer and put it back in that pan; I'll put that in the refrigerator to defrost.

I also find it handy to write the recipe name and cooking instructions on the foil packet (before it goes in the freezer). 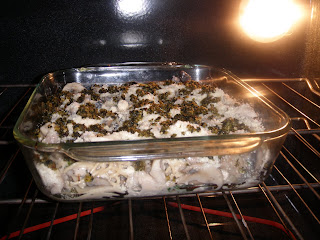 Some for Now: Bake at 350 degrees for 30 minutes, and you're done! I sprinkled some Basil Pesto on top just for fun. Ta-da!

What are some meals you've found that freeze really well? Please share!

Free spins, reload bonuses, and VIP bonuses are all potentialities at an online on line casino. However, a player could discover the situations or tips connected to the provides to be unfeasible. Select a reward that has social constraints, a sensible bonus vary, and a cash-out cap. Yes, {there is|there's|there could be} at 1xbet all times a chance that you would possibly strike it lucky.