Every week, I get local produce delivered to my doorstep by The Produce Box. The convenience of home delivery is clearly an advantage for someone like me, with a new baby at home - trips to the State Farmers' Market in 100 degree heat are pretty difficult for baby Rosie.

But what about everyone who has to go to a farmers' market, stop at a farm stand, or choose a different grocery store to get local produce? Why should they bother?

I believe the local foods movement is motivated by (in no particular order) a desire for a higher-quality product, consideration for the environment, and price. 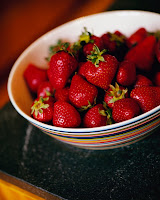 The strawberries are what first won me over. When I sliced into the first one and saw that deep, deep red color, I was a believer in local produce. I have not seen a berry that red in a grocery store, not ever.

Have you ever bought peaches from the grocery store and brought them home, hoping they'd ripen soon, only to discover they never really do? Peaches shipped in from across the country are picked rock-hard and green, and ripened by a gas in the truck. They can't taste the same as a local peach!

A clear advantage of local produce is that it may be picked ripe. The produce I received Wednesday was still in the ground, growing, on Monday - maybe even on Tuesday! If it had to be trucked across the country first, it could not have been picked ripe, or it would have rotted by the time it arrived.

Food Miles: the distance food travels from the farm to your table. Purchasing local produce means your food didn't have to be shipped across the country (or the world!) to make it to your table.

Initially, I thought the concept of food miles was the entirety of the discussion. I live in North Carolina, so if my tomatoes come from NC instead of California, they have a smaller carbon footprint, right? Not necessarily. 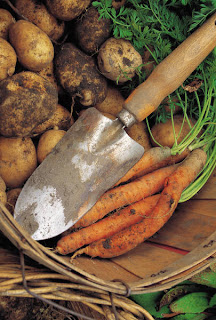 Eating local is not about getting the local version of every food item you want. If it's not meant to be grown locally, there will be a greater environmental impact. To lessen the environmental impact of the food you put on your table, buy local, but be smart about it. Think about what grows naturally in your area.

An important consideration is whether the product naturally grows well in your area. Oranges grown in North Carolina would have a more negative environmental impact than oranges shipped in from Florida.

Consider the example I found in this wiki article on local food. "... lamb raised on New Zealand's clover-choked pastures and shipped 11,000 miles by boat to Britain produced 1,520 pounds of carbon dioxide emissions per ton while British lamb produced 6,280 pounds of carbon dioxide per ton, in part because poorer British pastures force farmers to use feed. In other words, it is four times more energy-efficient for Londoners to buy lamb imported from the other side of the world than to buy it from a producer in their backyard."

Really, to determine the environmental impact of your food, you must account for the full range of resources. Fertilizer, fuel, the heating of greenhouses, building materials, heating, cooling, and packaging equipment... they all contribute to the carbon footprint of your food. 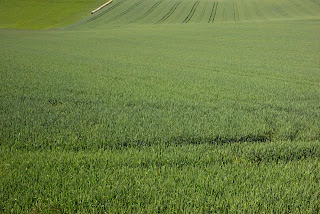 The consumption of local produce creates a higher demand for variety from local farmers. Growing a variety of crops is a sustainable farming practice that will help keep the land healthy, reduce the need for pesticides, and lower the need for commercial fertilizers.

Examples of these practices are multiple cropping,  where several crops in the same space during a growing season; crop rotation, growing very different crops sequentially in the same plot of land; and winter intercropping, where a farmer plants leguminous crops - think beans and peas - during the winter.


Cost to the Consumer

This week, I decided to price my produce box contents against two local grocery stores, Kroger and Lowe's Foods.

I spent $22 for my box of fresh, local produce from The Produce Box.
In one case, I'd have spent more at the grocery store; in the other, I'd have spent the same. Keep in mind, though, that this was delivered right to my door. I believe my time is worth something... and they saved me time, for sure!

If there are roadside stands near you, check them out! As noted in an article by GetRichSlowly.org, they can be the cheapest of all! GetRichSlowly.org has a more current article (May 2010) about how to get the most out of a farmers' market. 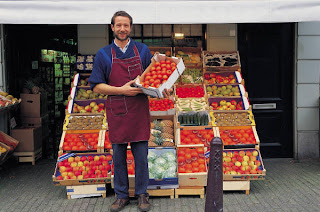 Buy in-season local produce, and you will

I also think it makes a fun family trip to go to the farmers market - the one near us always has samples, too! I see something new every time I go. Receiving my weekly box of local produce has opened my family up to all sorts of new foods: kale, okra, eggplant, new melons.. the list goes on.

What about you? What are your thoughts on local produce?

I agree that buying local is beneficial on multiple levels. You can't beat the freshness and just better flavor found in local produce. It gives me a warm feeling to know that I can and am helping to support sustainable agriculture and my local economy by participating in The Produce Box and buying from local farm stands and markets.

I have enjoyed trying your different recipes and enjoy the inspiration your blog has added to my culinary adventure!
Keep it up...

I love getting my Produce Box every week. I am eating better and trying veggies I have never cooked with. Local is best.